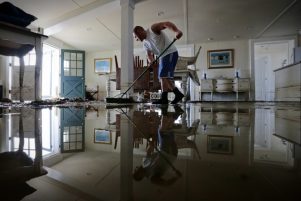 Jason Locke sweeps water and mud from his parents’ home in Westport, Mass., Tuesday, Oct. 30, 2012. Many homeowners who suffered losses because of flooding from Hurricane Sandy are likely to find themselves out of luck. Standard homeowners policies don’t cover flooding damage, and the vast majority of homeowners don’t have flood insurance.Yet it’s likely that many Northeasterners will purchase it in coming months, hoping they’ll be covered the next time around, at a cost averaging around $600 a year. (AP Photo/The Standard Times, Peter Pereira)

MMR mold stain remover is the most rapid mold remover on the market. Designed for easily removing mold stains from building materials such as the wood found in attics and crawl spaces

MPI creates an incredible barrier for unwanted micro-organisms in your household. Permanently bonded to the surface, MPI will not be worn away by time.

Shockwave is extremely useful as an all-in-one treatment for anything-wood, carpets, and other surfaces that have porous qualities.